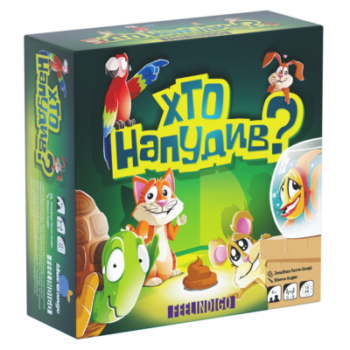 An impressive poo was found in the middle of the living room. One of your pets or one of the other players’ pets must have done it.

Defend the innocence of your 6 pets by getting rid of all your cards. Quickly find the right card as they are accused, lay it down first, and then pass the blame to another animal. To avoid being the owner of the guilty pet, make sure to act fast and remember which animals were already proven innocent.

The youngest player starts the game by putting down the pet of their choice in the middle of the table and saying, for example: “It was not my turtle that pooped in the living room, but I think it was someone’s hamster”. Everyone else must now race to find their hamster card and be the first to place it on top of the turtle card that is on the table, proving the innocence of their hamster.

Each round, the owner of the guilty pet collects a poop token. At the end of the game, the player with the least amount of poop tokens wins.